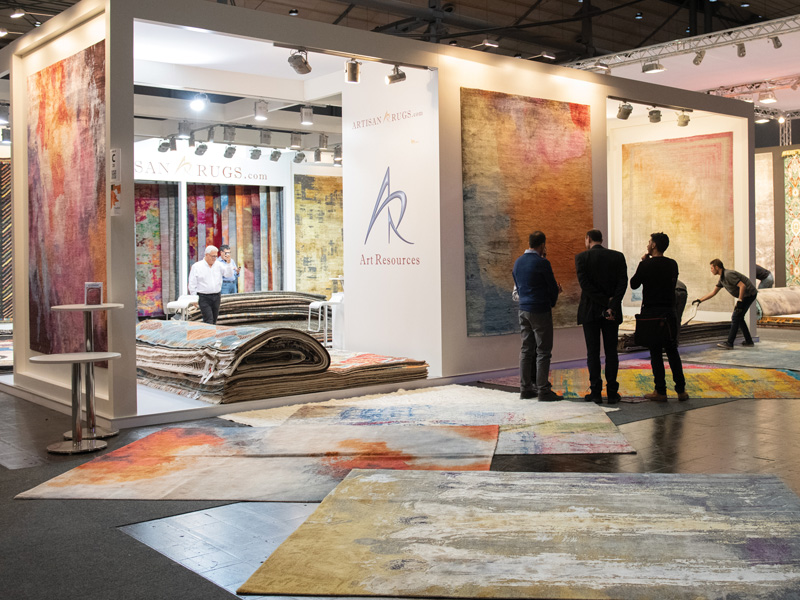 Domotex, the trade fair in Hannover, Germany, long ago established itself as the embodiment of its tagline, “The World of Flooring.” As the brand now expands globally with regional shows in China, Turkey, the United States, and soon Mexico, it is important to analyze what the show offers today’s buyers. Rug Insider asks Lisa Slappey of Pride of Persia Rug Company and Postmodern Traditions in Houston, Texas, to weigh in on Domotex and on the market more broadly.

“From my early markets in Atlanta in the 1990’s to recent Domotex visits, I have noticed a marked increase in the number of women, particularly from the United States, attending as buyers representing their own businesses,” begins Lisa Slappey describing her relationship with the trade. “In those days, I knew very few rug dealers beyond Houston, but Atlanta is my hometown, and I was proud to take my parents to the show as guests. When dealers ignored me on that first visit, looking instead to my father as the buyer, he shook his head, pointed to me, and said, ‘No. She’s your customer.”

“As a young American woman representing a small Persian rug showroom in Texas, I was a bit of an anomaly, perhaps even a curiosity. My rug knowledge, however, permitted me to be taken seriously. My smattering of Farsi came in handy as well, and I quickly made a few business friends to whom I remain ever grateful. I especially enjoyed the July shows with the “temporaries” on the second floor of the AmericasMart, where there was an almost chaotic urgency to see everything before it disappeared. It’s been several years since I’ve attended the Atlanta show however. The excitement wore off as my favorite importers closed their showrooms at the AmericasMart. Now I am a regular at The Rug Show in New York and Domotex in Germany.” 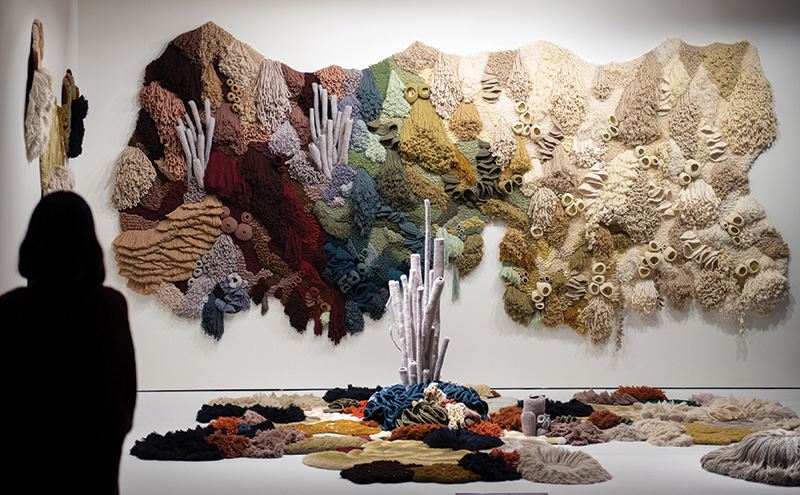 Slappey and I first met several years ago via social media and have subsequently developed a friendship built upon a foundation of rugs. We regularly enjoy a working/socializing breakfast together during both the fairs Slappey mentions, discussing topics varied and of variable importance. I trust her analytical mind to provide context. Slappey goes on:

“What inspired me then was the magnitude of the rug market. I began to see rugs as not merely an avocation but an industry. My early education in rugs centered on Persian pieces, with a particular attention to tribal rugs and antiques. My business partner, Mehdi Abedi, and I saw that the interior design world, with which we were becoming increasing allied, was moving away from our beloved old Persian rugs. At least one of us would have to venture into this new world. I was eager to learn.” This is how Postmodern Traditions was born.

“As for inspiration? Mine has increased exponentially with the innovations in the contemporary rug market and with the challenges and opportunities brought about by technological changes. I love seeing the new designs, new techniques, new materials breathing life into the hand-knotted rug market. I love reconnecting with old friends and making new ones while discussing our businesses over coffee and dinner and, always, stacks of rugs. Market, for me, is about community.” 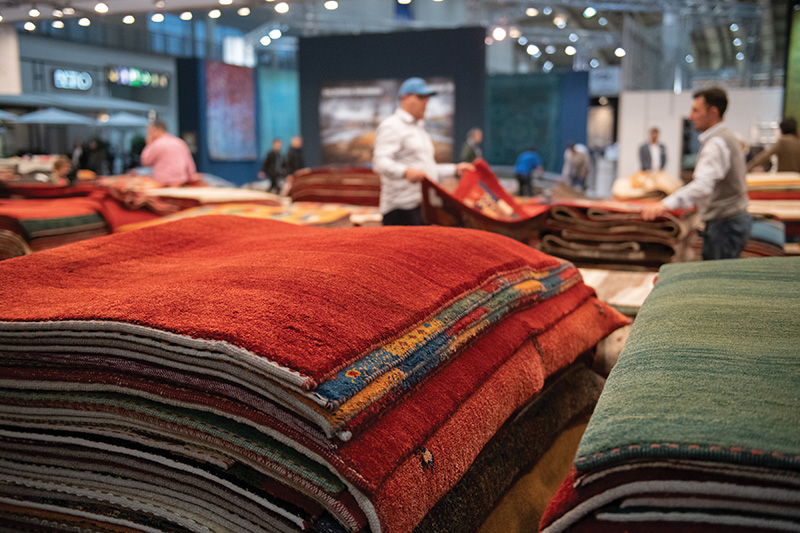 The opportunities Slappey highlights as a result of ‘technological changes’ are often maligned by old-school rug merchants who, not unlike Slappey, started in the industry with ‘beloved old Persian rugs.’ While this forward-looking attitude is of course key to success, one cannot help but wonder where the balance between tradition and innovation, old versus new, slow versus fast, is to be found. “Technology is the most pervasive market change. Everyone has a camera phone, and with such widespread access to design programs, how are the truly innovative rug producers to protect their designs long enough to bring them to the retail market?”wonders Slappey, before concluding that ‘intellectual property concerns may prevent rug producers from exhibiting certain pieces or even from attending a show.’

At the same time, another advancement in technology has greatly impacted the rug industry. “Has anything proven more disruptive to the traditional rug business than the advent of e-commerce?” asks Slappey rhetorically. “Competition from online sellers forces brick-and-mortar establishments to either join (to varying extents) the online world or to refine and improve business practices in order to survive the widespread changes. It requires differentiation to serve a market more interested in quality, authenticity, and service than in cheapness and availability.”

That distinction parallels shifts seen in the market over the past few years. Regional markets—or shows—in the United States have shifted away from handmade and hand-knotted toward products catering to consumer segments more interested in affordability and available stock. They have also been targeting the more lucrative audience of interior designers and retail shops, offering a host of housewares in addition to rugs. From a business standpoint, the shift has been near seismic.

“From the buyer’s perspective, regional markets afford attendees ease of access and allow for shorter or more frequent trips, typically strengthening relationships among already familiar parties. Global markets, on the other hand, are more likely to introduce buyers to new suppliers and their products. A global market such as Domotex should strive to convey the powerful benefits of bringing together the international rug/flooring community in a single annual gathering,” says Slappey. Yet when asked if she could organize a rug specific show reminiscent of the “great old shows” everyone laments, she responds, “Domotex may simply be too large to sponsor the type of single, unifying festive event those old shows offered, such as off-site banquets and awards ceremonies. How about hosting ticketed parties, based on category (hand-knotted, machine-made, flooring, etc.) after-hours in ballrooms of the larger hotels?”

As important as Domotex remains on Slappey’s annual calendar, she is also keen to note that the very impetus, the entire raison d’être of trade shows has been undermined to a degree. Slappey again, “The role of the importer as distributor has been changing for some time as retailers have gained direct access to producers. The future model is likely to feature a more direct path from maker to customer. Although I do not expect importers and showrooms to be eliminated from the process, I do see certain segments of the retail clientele showing more interest in where and how the items they purchase are produced. This requires a novel degree of transparency. Showrooms in this model could become sources of not merely products but, importantly, information and expertise for educated consumers, who then become more astute and loyal buyers. I also see potential for a horizontal expansion among groups of retailers who may collaborate as their own importers.”

This is not to say success is not still to be found, but it does require understanding that the total size of the handmade and hand-knotted market is decreasing, and as a result some entities unsuited to the current business environment will ultimately cease to exist. ‘From a retailer’s perspective, success is built on service. What can a retailer offer—in addition to product—both before and after the sale? A stellar reputation, true expertise, quality wash and restoration services, and the reasonable expectation that the showroom will be around when the client needs help are essential to long-term success in a rapidly changing environment. In a world in which buyers can find almost anything online, those sellers who haven’t differentiated themselves will struggle,’ emphasizes Slappey.

So while challenges certainly exist, it is also important to note the key elements Slappey has identified as enjoyable about Domotex, and the importance of trade shows tout court. Reiterating the important point we started with, she says, “Market, for me, is about community.” When asked to list five things she enjoys about Domotex she responded: “1) A sense of community among retailers, importers, and producers (admittedly, category-based); 2) Diversity of products offered; 3) The Carpet Design Awards; 4) Themed displays and activities; and 5) Involvement of trade publications (tours, awards, presentations, promotion).”

On this last point Slappey readily lauds Hali and Cover Magazines for their involvement, stating, “I owe a personal debt of gratitude to Hali/Cover for expanding my market horizon into the international arena. Their invitations and logistical support made possible my first trips to both Domotex [in Hannover] and [Istanbul Carpet Week] in Istanbul. The partnerships between shows and publications are vital.” This is a great point of debate not only for this author personally but for Rug Insider Magazine as well. Our reportage must strike a balance between being involved in the ways Slappey suggests, and being independent enough to avoid becoming just another marketing/propaganda arm of any show or the industry*.

But Slappey gets to the most salient point when she says, “Rug markets are essential to our industry, but they work only if they foster strong business relationships leading to sales and profits. Let us be wary of market fatigue. With so many choices, one could spend the entire year market-hopping rather than selling rugs.”

*Note: As a nod toward “a novel degree of transparency,” Michael Christie has, since 2017, received a travel stipend from Domotex in exchange for unrestricted coverage of the fair. Further, Christie actively participates in various activities during Domotex on an in-kind basis; programs for 2020 are already under development.