Sellers of all manner of wares, particularly those crafted by hand, have long sought to offer the most authentic version of its class, including rugs and carpets. However, problems arise when the description doesn’t match the reality of the rug at hand. What is the modern consumer to do?­­­­­

It is worthy to note that throughout my oeuvre, such that it is, you will find no small degree of exaggeration, hyperbole, and irreverence. It’s who I am; it’s how I write; it’s how I see the world. Black, but not just any black. The most perfect black of which you can think. Soot-from-a-freshly-cleaned-chimney black; a matte with no discernible texture, as though you’re staring into a void. Vantablack® makes me wonder, “Can this be applied to yarn?” That kind of black. To the far other extreme, a white of no-less-than-equal splendor that’s pure, but not devoid of all hue. Perhaps Benjamin Moore’s Grand Teton White, if only because it reminds me of my 14-year-old self giggling at the name while basking in the very same majesty that first greeted those French explorers. Each color—no less special than the other—vying, clamoring to be recognized as the best, the most authentic, the singular whatever it is.

“Exaggeration is my only reality.“ ~ Diana Vreeland

Caveats must be made and acknowledgements uttered as we—the big humanity we—look toward not only the future of weaving but the future of we, of humanity and civilization. The year thus far has made this abundantly clear. Black and white no matter how glorious each may be, are not the only options. This has long been my stance regarding the appreciation of rugs and carpets but it also means we must acknowledge there is no one way, no one authentic way of making carpets.

To claim one method is more authentic than another is a bit reductive (a conclusion I credit to the food critic Peter Meehan). For in doing so, one must choose techniques—some which have endured as traditional, some lost and re-found—from another time or perhaps place and then follow the conflated and potentially misguided notion that they are “the best.” While simultaneously equating the superlative with the authentic, much of what is today attributed as “the best” is nothing more than re-imagined versions, mimicries of the technology and aesthetic of another era. We are seemingly stuck without a clearly defined look or aesthetic. Save for unoriginality there is no leitmotif for this particular time.

This is not to say things cannot be authentic to their time and place, but beyond some hazily-defined period or distance, the authenticity must and does wain. To continue with the food analogy, while Neapolitan pizza can be made anywhere globally with the very same—if not also less fresh—ingredients found in Naples, is not one made in Naples somehow more authentic, more true, more honest? Of course anyone can make bread topped with tasty morsels just as anyone can make a carpet a la façon polonaise—and several do. 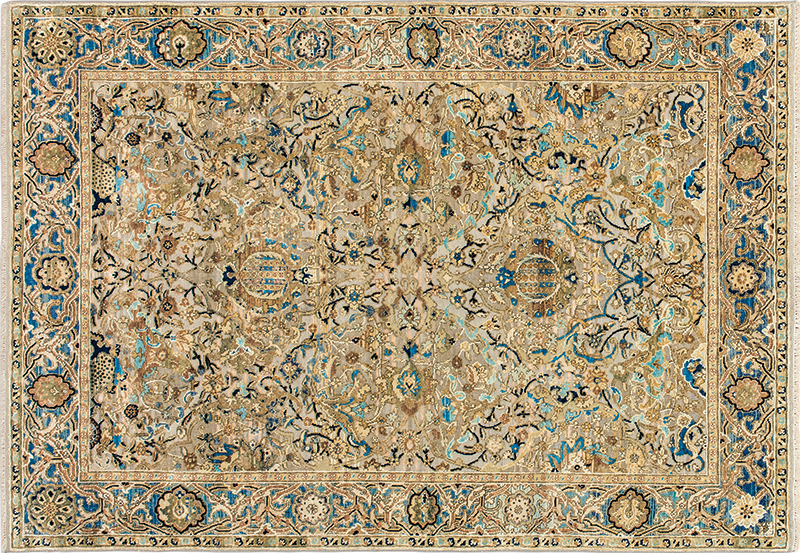 These things are not independent, and moreover, attempting to separate the two means that someone—usually a customer of any level—is not being presented the full picture, which is to say they are uneducated or undereducated consumers.

It is a foolish game to attribute anything to “the times in which we live” just as it is foolish to claim authenticity solely because a diverse and opinionated collection of rug aficionados and/or marketing people defined one particular glimpse of reality as “the best” or most authentic.  It’s the same reason I rarely write “In my opinion… ,” though I have on occasion. Of course it is my opinion, I wrote it. Likewise what we are doing reflects the time in which we live. It’s happening now. This immediacy of time and place, of connection to all the things that make a carpet of any type, form, model, material composition—what have you—a carpet indicative of simply that instance, makes it authentic. In the context of the fall 2020 issue of RUG INSIDER Magazine, it also makes it decidedly modern. We would do well to remember this and focus on accurately describing wares of all calibre because as Mr. Johnston fictitiously said “... a gentleman should always mean what he says.” 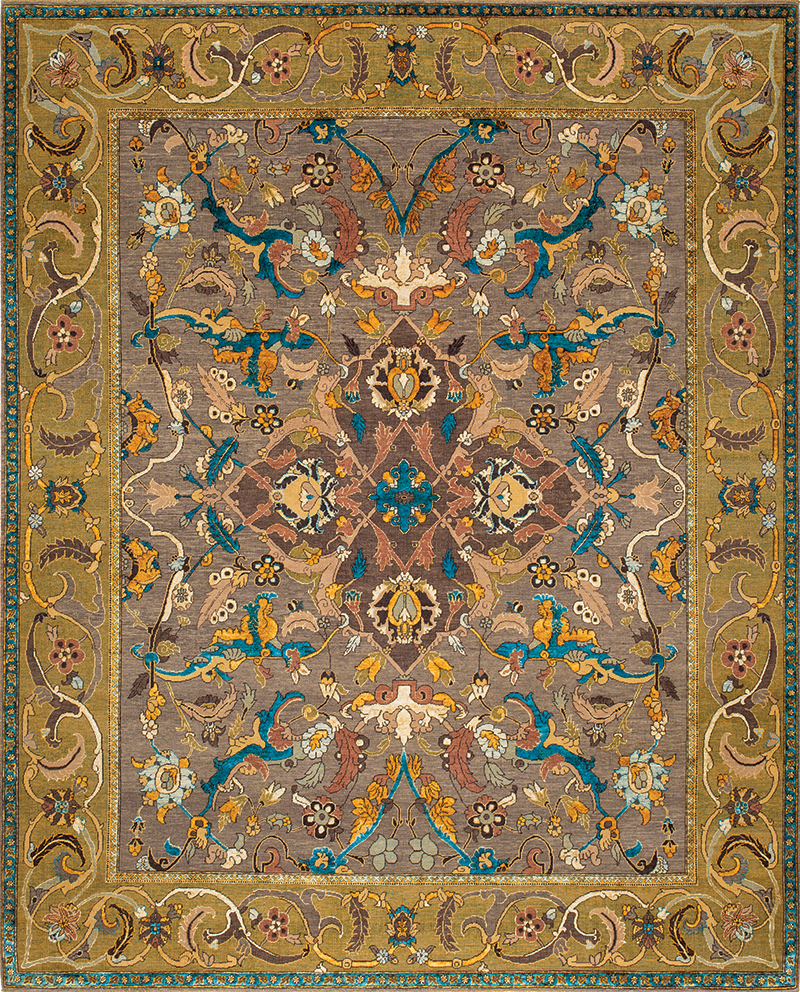 Wariness must be paid to claims faux or genuine. Voiced opinions must be tied to the source just as “authenticity” in its convoluted meanings must be tied to its source. Facts must outweigh opinion in technical matters, relegating the latter to concerns more aesthetic and subjective. For authenticity to exist, we must revere and foster it in all forms, no longer borrowing credibility, or aspiring to be more, or to be everything to everybody. In its stead we must speak truthfully, honestly, and transparently. For if we genuinely believe in “educated consumers” we must also genuinely believe in the sharing and spreading of knowledge because these are not distinct concepts. For the public relations person who once told me telling the story of viscose was “old” and need not be told again, I  respectfully submit it is a story equally as worth telling as the tales of inferior, better, worse, or superior quality craftsmanship and the like. Why? Because for consumers to be educated they must be provided all of the facts and information, only then can they make an informed purchasing decision.

“If you cannot say what you mean, your majesty, you will never mean what you say and a gentleman should always mean what he says.“ ~ Reginald Fleming ‘R.J.’ Johnston as played by Peter O’Toole in ‘The Last Emperor’ directed by Bernardo Bertolucci.

I recently read “The Art and Craft of the Machine” written in 1901 by Frank Lloyd Wright. In it, Wright waxes poetically about how “the machine” has “broadcast degradation of every type and form sacred to the art of old” before lamenting the pastiche by quoting Marshall Field: “A good copy is the best we can do.” How similar the song of the siren 119 years hence. Though we must acknowledge the comforts “the machine” brings to the masses, we must also question this era’s incessant need to revisit, repeat, remake, redo, re-, re-, re- the past without envisioning a different future.

Whether or not the consumer then chooses to buy a less expensive product or one more costly, one knock-offish or original, one faux, one plastic, one, one, one, one of any imaginable form of authenticity is of little concern so long as they were provided with information: pertinent, tangental, irrelevant or otherwise. 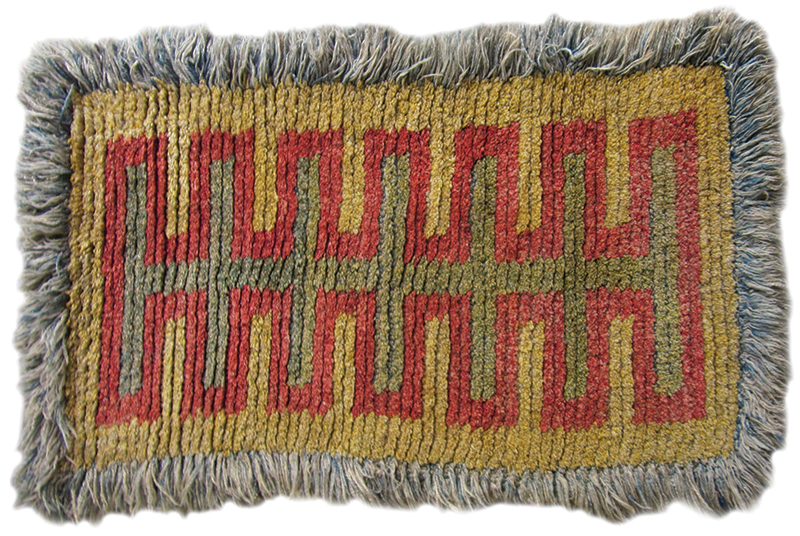 I am a rug snob. I’m also a realist who knows the better place to rest salt-uncrusted, muddy, slushy, and snowy winter boots is not some rarified authentic Tibetan, Persian, Anatolian, or where-have-you rug, but rather an authentic, plastic, dust-colored shag that can be hosed down come spring.

[Editor’s Note: A longer, slightly more disjointed version of this essay first appeared in “The Ruggist” on April 23, 2018. It has been edited for length and “the times in which we live.”]