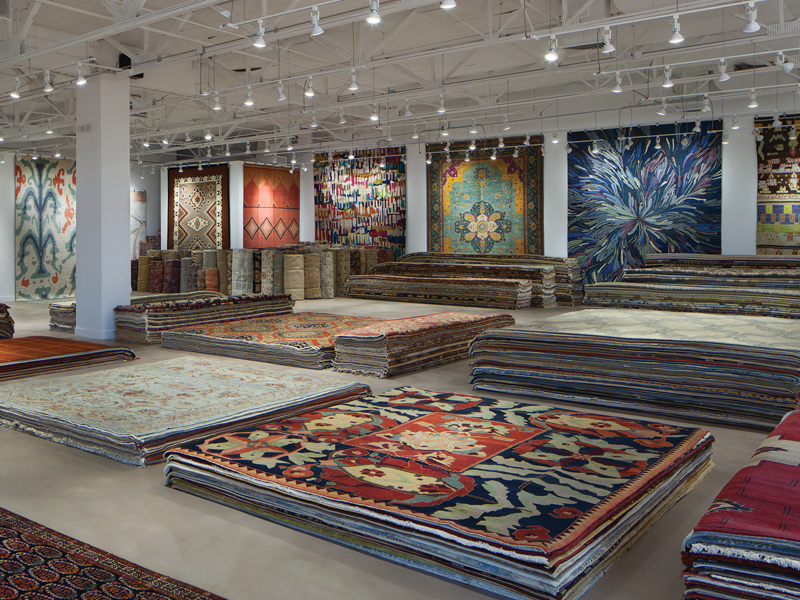 With our hearts full of nostalgia we look to the past for guidance as we examine five areas of the industry which have undergone tremendous change over these past twenty-five years of RUG INSIDER Magazine. As for the next? Opportunity awaits.

It is somewhat serendipitous that this year marks both twenty-five years of RUG INSIDER and also the same quarter-century of my involvement in the hand-knotted rug and carpet trade. As a fresh, wide-eyed, rather green and unsophisticated rug salesman who knew not of the idiosyncratic nature of hand-knotted rugs nor their charms, entering the trade at the same time as this publication meant only one thing.

I never knew the industry without RUG INSIDER and its pages have contributed to my own knowledge of this craft; the same can undoubtedly be said for countless others.

To look at issue one and issue one-hundred is the same as comparing that photograph of yourself from 1996 to the reflection in the mirror today. Surely they are recognized as one and the same, yet time has certainly graced one of those visages with the benefit of wisdom, or so we hope. Change as has been written about extensively in this publication, is an inevitability. These are but a few examples.

The Specialty Rug Showroom
For aficionados like myself, there is only one place suitable for purchasing a rug or carpet: the specialty rug showroom. Ostensibly staffed by learned and well-informed salespeople, it is the environment in which I came to love the hand-knotted carpet trade and the one to which we presume the rug customer will turn when looking for something more than they might find online.

Of course, online competition did not exist with said showroom in the 1990s. No, back then competition was the dealer across the street or in the next city over, and we somewhat naively thought ‘protected’ territories granted by wholesalers would stave off progress. They did not. It was also an era in which the showroom was somewhat beholden to a system, necessitated by the times, of maker > exporter > importer > wholesaler > showroom.

What happened was that technology—more on this later—rendered these territories and distribution models somewhat mute. Now competition may be the dealer across town, just as it might be a single person with an online shop, just as it might be a manufacturer itself in one of those exotic lands in which carpets are made.

Likewise, the showroom may be the importer, working directly with the maker. In the never-ending hunt to close the sale, it seems everyone is now actively and directly chasing the elusive and fickle, end consumer; becoming if you will, a virtual showroom with limitless reach.

Trade Shows
Picture it … . Atlanta! The 1990s. For rug buyers there was simply no other destination than what was then the National Oriental Rug Show (NORS) presented by the Oriental Rug Importers Association (ORIA) and AmericasMart. A concentrated mix of permanent and temporary showrooms ensured that Atlanta, as the market was known as colloquially, offered an unparalleled selection of rugs and carpets, be they hand-knotted, handwoven, tufted, machine-made, or otherwise.

It was a potent environment in which deals were made, egos were inflated or bruised, and industry movers and shakers networked; moreover it was one which fostered a level of camaraderie and cohesiveness unseen in these times of COVID-19.

Beginning with the High Point and Las Vegas markets, then the New York International Carpet Show, Metro Market Week, and The Rug Show, rug importers and wholesalers embarked on a pursuit that continues today. Not dissimilar to the impetus for Atlanta, show impresarios have sought to both tailor their presentations to the nuances and whims of home fashion, in addition to maintaining a critical mass of exhibitors and buyers alike.

Factoring in international competition from Domotex for example and it was safe to say—at least until 2020—that while each of these shows had and has done well at various times, no single market has dominated the conversation, nor held the same mystique as Atlanta once had. Then came the pandemic and physical trade shows stopped, supplanted, by necessity, by virtual shows.

What comes next for rug trade shows is entirely unknown, but their importance, and moreover the importance of everything that Atlanta once was, has not waned. If anything, I believe the importance of trade shows has never been stronger and I look forward to a future in which hybrid events revive the best of past physical shows while adding complementary virtual components.

The Designer Carpet
In 2016 I was advised that it would  “behoove me to study and learn to identify” what I will call more classical or traditional types of hand-knotted carpets; that is to know by sight and touch the difference betwixt any two carpets, particularly those which the septuagenarian advising me had spent their career selling. Think Serapi versus Heriz versus Indo-, Sino-, or the like.

I was at once both offended and bewildered. Was my extensive knowledge of carpets made in the years 1996-2016 somehow insufficient?
No, but my specialty was at generational odds with what carpets had been more or less until the time I entered the trade and RUG INSIDER began publishing. It seems the 1990s birthed many consequential things including the turn of the century designer carpet.

Gone now are the wistful halcyon days when innate artistry, regional ethnographic charm, and a certain degree of folk first endeared Western rug buyers to the exotic nature of oriental rugs; to carpetry itself. Those were the carpets oft described as having a mystique about them. In their stead the designer carpet brought polished celebrity and designer brands with sleek, apparently modern styling to the masses, supplanting terroir with a degree of superficiality; or at least I have been lead to believe on more than one occasion.

Whatever may next come to pass, I know the only thing that seemingly endures is a quest to remain at the vanguard of design—however that is defined. I know the current popularity of Moroccan with its textural appeal will eventually fade, as have unnamed others, just as I know economic realities will drive hand weaving of all manner, into further uncharted territories. I cannot help but wonder what innovations will come next.

Customization
“No.” That was pretty much the answer to any customer who dared inquire about the possibility of customizing a rug back in 1996. Yes, it was technically possible, but the limitations of the era all but precluded the ability to create a unique, one-of-a-kind, bespoke, custom, or however one might call it, individualized carpet for the extra special client.

Those who were able to navigate the logistics of customization—and there were some—were rewarded with something truly recherché; something befitting of the term bespoke or simply perhaps extra to use the vernacular of today. Contrast that with today wherein the answer is more akin to “How would you like your rug?” for reality is now such that customization of any attribute is on the table.

Just as the advent of programmed rug sizes a century ago improved customer access to regimented carpet sizes in specific styles, so too has customization improved access to … well, every possible option one might imagine. Material selection, design, size, shape, so on and so forth, the industry has gone from all but impossible to veritably limitless options in a generation. All thanks to …

Technology
On my last pre-pandemic trip to Kathmandu, I was having dinner with afriend whose family has been involved in the wool and rug trade for generations. In fact, I view his work as seminal to the rise of the aforementioned designer carpet and so when he tells stories I listen.
One needs only to hear these anecdotes to understand how much technology of all forms, but especially digital, is integral to all of these advances. He tells of making an appointment by letter with Western buyers so that the two parties could have a conversation via a central
telephone office in Kathmandu. Now, of course, I can pick up my mobile phone and video call with him at a moment’s notice.

Whether it’s a discussion or even a remote visual inspection of a carpet on the loom, the importance of technology cannot be overstated.
But it’s not just verbal and written communication that has changed. So too has the way we convey design information, including that necessary for customization, as has the way we sell rugs, be it at the specialty showroom, trade show, or increasingly online. It all hinges on the exchange of information which has gone from approximately 1.9 petabytes of internet traffic per month in 1996 to 122,000 petabytes per month in 2017. A bonafide 64,000-fold increase!!

In 2021 with everything virtual, one must further marvel at the connectedness of it all and where all of this sharing of information will take the
rug industry. I have well-informed suspicions but shall leave those for another day. Suffice it to say, the only uncertainty in my mind is how will we evolve to meet the challenges of today and the future—myriad as they may be.

As I said before, opportunity awaits.