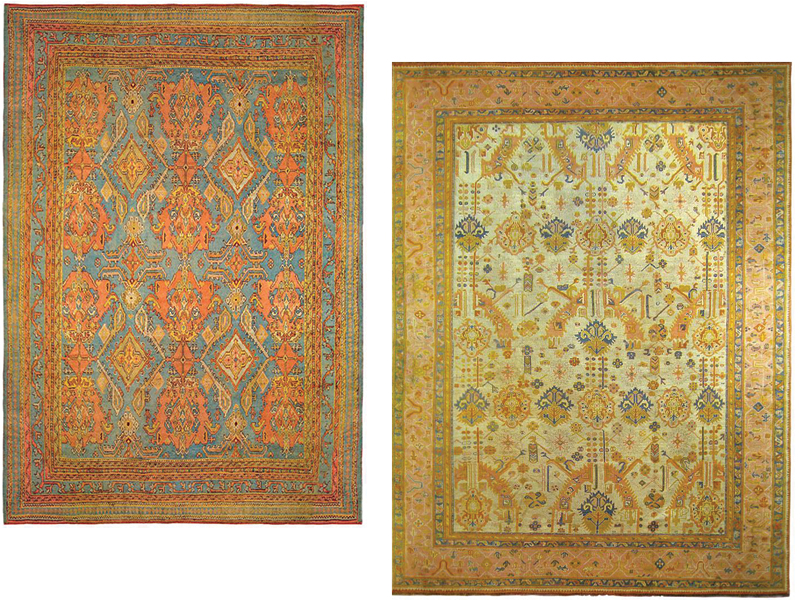 The Eastern Carpet Long Beloved By the West

Within the wide world of oriental rugs, one could rightly say that beauty is in the eye of the beholder, as each person has their own criteria as to what makes one type of rug more beautiful or desirable than another.

Or perhaps the opposite of all of those, the rug without a particularly intricate design, a relatively coarse weave, and a relatively subdued color palette being the most appealing?

Enter the world of the antique Turkish Oushak carpet. Compared to many of their Persian rug counterparts, antique Oushak carpets are generally less intricate, less fine, and less colorful. Rug collectors long frowned on these Turkish rugs, looking at them as inferior rugs with coarse weaves, bland colors, and primitive designs.

For others, though, Oushak carpets are the pinnacle of what a beautiful vintage rug should look like, as they prefer the decentralized designs, with no central medallions, the simple color palettes, which are more subdued and less intense, and the basic geometric designs, which are drawn in larger scale and with more relaxed shapes and spacing.

Many interior designers and decorators around the U.S. and beyond love Oushak rugs for exactly this reason. They are simpler, softer-looking rugs, with large-scale designs, primitive shapes, and unobtrusive colors. They are more in keeping with the aesthetic that has been preeminent in design for the last couple of decades in the U.S. and in Europe, and especially in Europe, have been the norm for much longer than that. 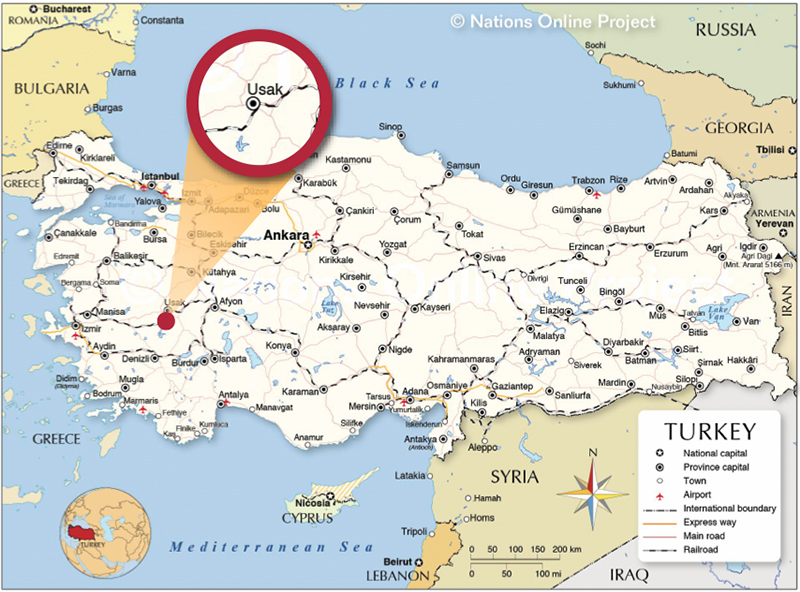 As far back as the 15th century, Turkish carpets woven in the Oushak (or Usak) province were prized by the European aristocracy, and began to appear regularly in some of the most revered paintings of the time, including the paintings of Hans Holbein, as well as in those of Verrochio, and other famous artists of that era (examples shown in below). 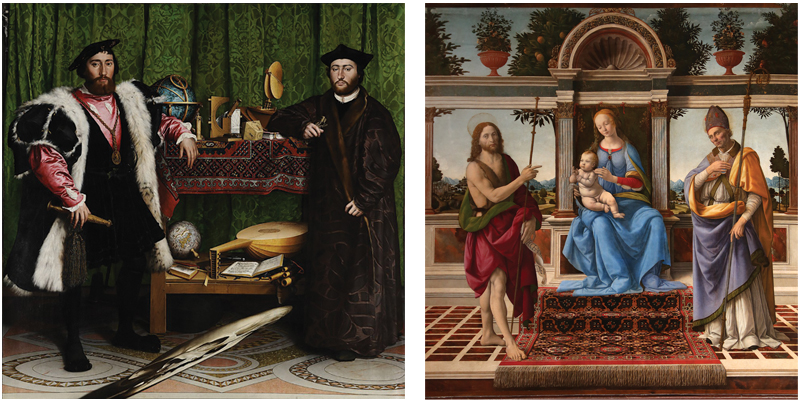 While the European market briefly switched its preferred aesthetic to the more elaborate and centralized designs of the French Aubusson and Savonnerie carpets for a time in the 17th and 18th centuries, the simpler designs, colors, and relaxed style of the antique Turkish Oushak rugs always remained in the European psyche, and reemerged in the 19th century in an even more subdued variation, which became increasingly in demand by the expanding ranks of the elite.

As monarchies and kingdoms started to dissipate, and wealth became more widespread among a greater number of families throughout the Continent, more and more households became interested in owning a replica of the famed Lotto and Anatolian carpets from Turkey, to bring the royally ordained standard of beauty into their own homes. A greater demand for Turkish rugs was created, and a concomitant increase in production ensued.

In the other main weaving center for oriental rugs, Persia, the traditional colors and centralized designs that were for a time also popular with the European gentry fell out of favor, and the demand for Turkish style rugs pervaded the weavers’ aesthetic.

European companies, namely Ziegler and Company, sent their directors to Persia to help to enhance and expand the workshops there, and to reorient the weaving aesthetic of the Persian masters into something more current with what was in demand on the Continent. Thus were born the Ziegler style rugs that were woven in the Sultanabad region of Persia, and which became the Persian answer to the red hot Oushak rugs from Turkey. These antique Turkish Oushak carpets, along with their contemporaneous Persian counterparts, remain extremely popular with the interior design trade in the West and are generally referred to as “decorative rugs,” as they are a style that the interior decor community finds most suitable for their clients’ needs.

Are these antique Turkish carpets really the best, most beautiful, or most in-demand rugs within the antique sector of the area rug industry?

In the following 'Insider Insights', we speak with several veterans of the antique carpet trade, including yours truly, Rodney Hakim of Persian Gallery New York, Nader Bolour of Doris Leslie Blau LLC, Jason Nazmiyal of the Nazmiyal Collection, Ilan Zabihi of J&D Oriental Rugs, and Omid Chaman of the Chaman Antique Rug Gallery to hear their ‘insider insights’, and see some of the best examples of what their favorite antique Oushak rugs from their respective world-class collections. 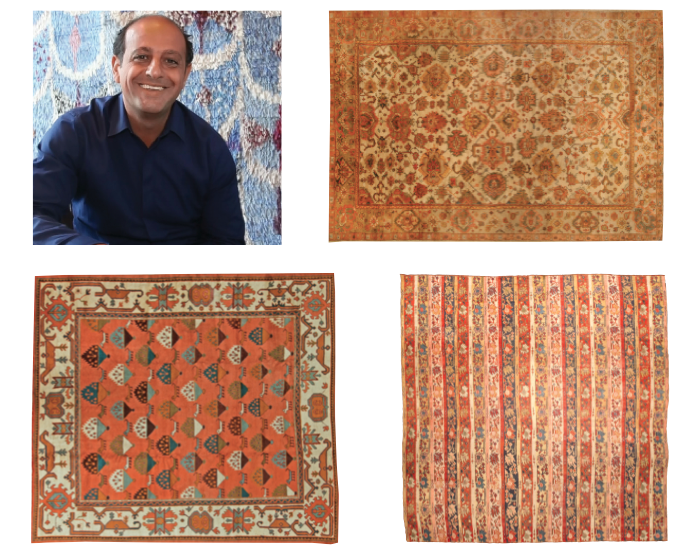 Nader Bolour is the owner of Doris Leslie Blau, LLC, a company that has been selling some of the city’s finest rugs in the Upper East Side of New York for decades, originally by the late Doris Leslie Blau, herself. According to Nader Bolour, Mrs. Blau was ahead of her time in indentifying the antique Oushak trend early on, and began acquiring them as early as the 1960s, when others in the city would not even look at the Turkish rugs, because of their relatively coarse quality.

According to Mr. Bolour, it is that so-called inferior quality that adds an element of quirkiness and surprise to the appearance of these rugs and gives them a certain individuality not always found in the more precisely woven Persian rugs. Oushak rugs, he says, were always meant to be for clients who are looking for a more playful look, consisting of more primitive designs and unusual colors. They are still strong sellers for Doris Leslie Blau LLC and are especially in demand in the Southern states. 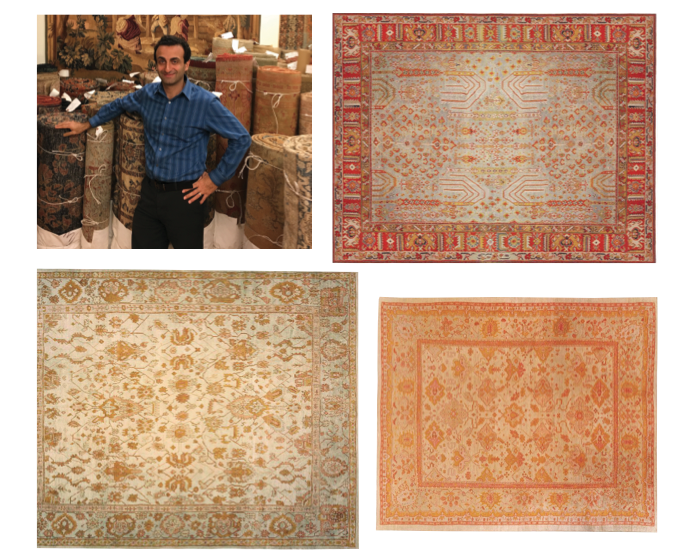 If there’s any indicator of which is the more popular of the two, I would have to say it’s the Oushak rugs, because our collection of them seldom stays in stock. Other rug styles have waxed and waned in popularity since I’ve been in the business, but Oushak rugs have never gone out of style. 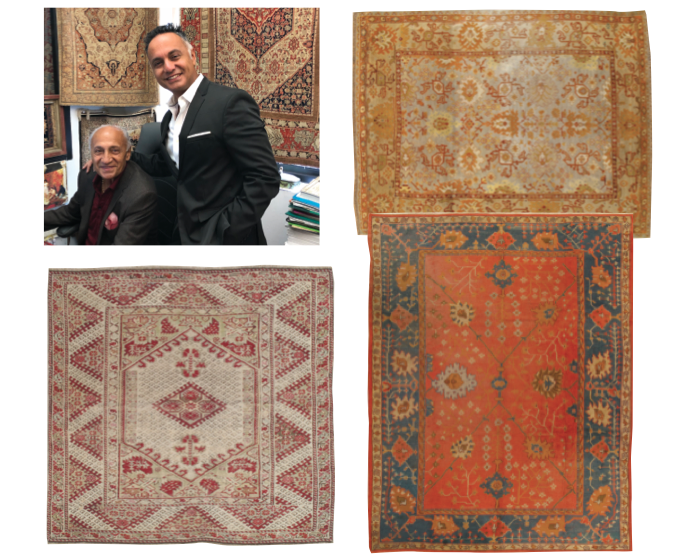 Omid Chaman and his father, Daryoush Chaman, have been selling antique Turkish Oushak rugs through the Chaman Antique Rug Gallery for decades and started importing them from Europe as early as the 1980s.

According to Omid Chaman, the business in antique Turkish Oushak rugs picked up steadily through the 1980s into the 1990s, and increased even further when the United States imposed sanctions on Iran, preventing Iran from sending exports of Persian carpets to the U.S. This limitation on the supply of Persian rugs made for an increase in demand.

The Chaman family recognized that trend, and assembled a vast collection of Turkish Oushak rugs, ranging in size from small mats at 2'x3', up to palace-sized carpets at 20'x40'. The Oushak carpets that they acquired tended to be the ones with the softer colors, more large scale designs, and simpler aesthetics.

According to Mr. Chaman, this softer color palette and simpler design is what is the hallmark of a casual rug design, and makes them fit better into the transitional and modern interiors increasingly favored around the United States. This makes them a dream choice for the interior design community, as the Oushak rug is a natural fit for the style in which they tend to decorate their clients’ homes.

Ilan Zabihi, along with brother, Rodney Zabihi and father, Daniel Zabihi, are the family behind the popular J&D Oriental Rugs, and are very active in the world of vintage and antique Turkish carpets. The company’s website, eCommerce outlets, and social media all regularly feature the unique and stylish Turkish rugs that the Zabihi family continually source from around the United States and beyond. The rugs that they trade in are often smaller size Turkish rugs, including scatter-size rugs, such as Yastiks, and runner-size Turkish rugs for hallways.

Nonetheless, the Zabihis have their fair share of experience with room-sized and larger size vintage and antique Turkish rugs. They are among the most active rug purveyors in the trade, and know more than just a thing or two about what makes an antique Oushak rug be the most desirable to a client According to Ilan Zabihi, the demand for Oushak rugs is not limited to the ones with the repeating “allover” designs, but also includes those with centralized medallion designs. If you ask Mr. Zabihi, it’s more about the rug’s age, color, and uniqueness that make it a one-of-a-kind. An Oushak with soft colors is the norm, but even one with saturated colors can sell, if it is something different.

He says that they get many, many requests for Oushak carpets, but in the larger sizes, and at the higher price points, the ones that will garner the most attention are the ones that have a certain level of authenticity to them. Whether it’s the pedigree of some type of provenance, the patina of age to the coloration, or a unique design, these are all things that can make an Oushak rug be the perfect one for a given client.

Jason Nazmiyal of the Nazmiyal Collection and Nazmiyal Auctions 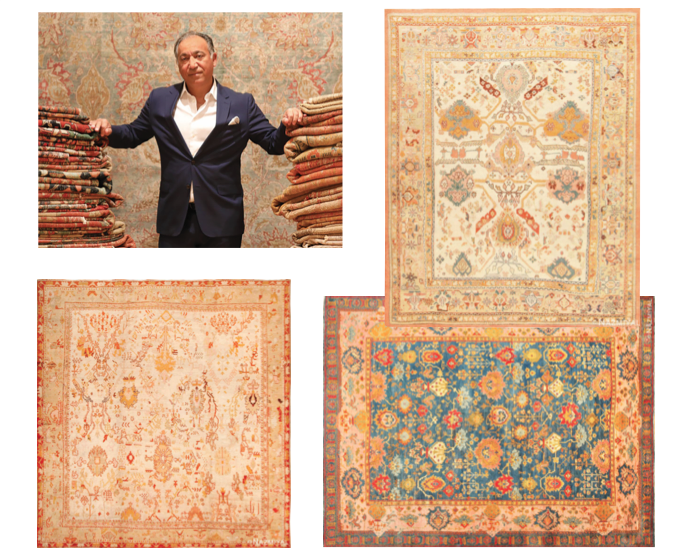 Jason Nazmiyal is the owner of the eponymous Nazmiyal Collection, which much like Doris Leslie Blau, is a magnet for some of the city’s top interior designers, with an ever expanding collection of fine antique rugs. Mr. Nazmiyal has also recently expanded his operation to include Nazmiyal Auctions, and his specialty rug auctions have become among the most popular in the industry.

When asked about antique Oushak carpets, Mr. Nazmiyal says that they are the most decorative style of antique rugs. Their softer, more muted color palette, and larger scale designs give them a more desirable quality, and make them easier for decorators to work with, as they don’t have a central medallion, and are thus more adaptable as to how they can be placed in a given interior.

Referring to the earlier Lotto carpets, Mr. Nazmiyal adds that the earlier Oushaks emphasized more red and blue colors, whereas the European and American traders who started to influence their production changed the aesthetic, making the rugs simpler, softer in color, and more decorative overall. This was the same change in taste and aesthetic as happened with Persian rugs, as the Western importers redirected the Turkish and Persian weavers into creating the type of rugs that their clientele overseas would most greatly enjoy and consume.

When asked about his favorite antique Turkish rugs, Nazmiyal points to those from the era between 1880-1920, as they were the ones that epitomized the transitional time between the previous generation’s aesthetic, and that of the burgeoning Art Deco period. He indicates that the Oushaks of this period are among the most desirable, as they are the ones with the softest and most muted color tones, even more so than the Ziegler Sultanabad rugs woven in Persia in that era.

Mr. Nazmiyal got started selling Oushak rugs about 35-40 years ago, from rug industry legend Mr. Dildarian, who had an outstanding collection of the Turkish carpets. Antique Oushak rugs have gotten progressively more popular and more widely accepted in the industry, says Mr. Nazmiyal, as they present a subdued alternative to the bright colors and jewel tones of many Persian rugs.

Oushaks are particularly popular with Nazmiyal’s clients in New York, Atlanta, and Texas, and are largely the main rug style upon which the colors and designs most new rugs are based. Mr. Nazmiyal has, himself, ventured into the new rug waters with Nazmiyal Modern, but has not stopped expanding his collection of antique Oushaks, as he has over 100 of them in his collection, from the 17th to 19th centuries.