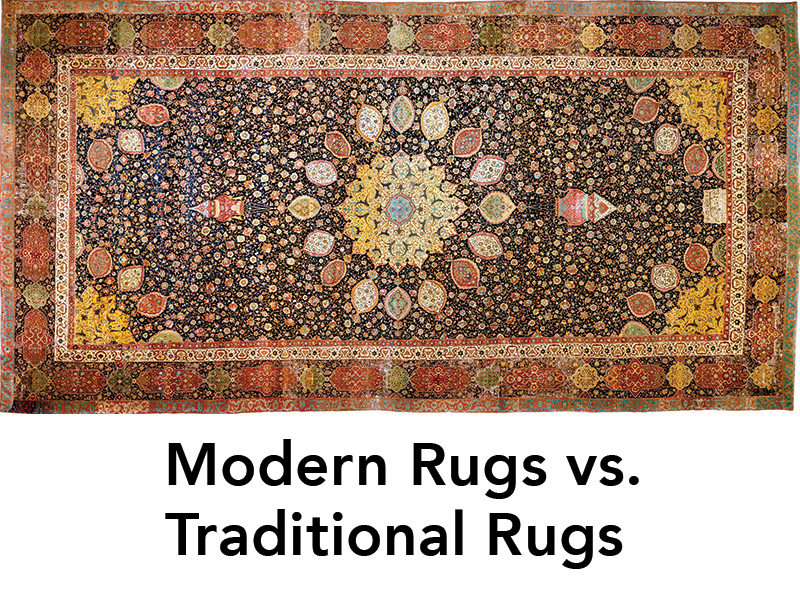 In the Winter 2022 issue of RUG INSIDER Magazine, one of the questions explored is that of the New Traditionals, as the question is asked, are today’s buyers sticking with Modern designs and colors, or are they returning to more Traditional styles?

For many years, the trend in the area rug trade has been to move away from Classic Traditional Designs, with their bolder colors, centralized stylistic elements, and busy fields, and to move toward more Modern designs, which tend to be characterized by softer, more subdued colors, and decentralized, uncluttered designs, often taking an Abstract form. 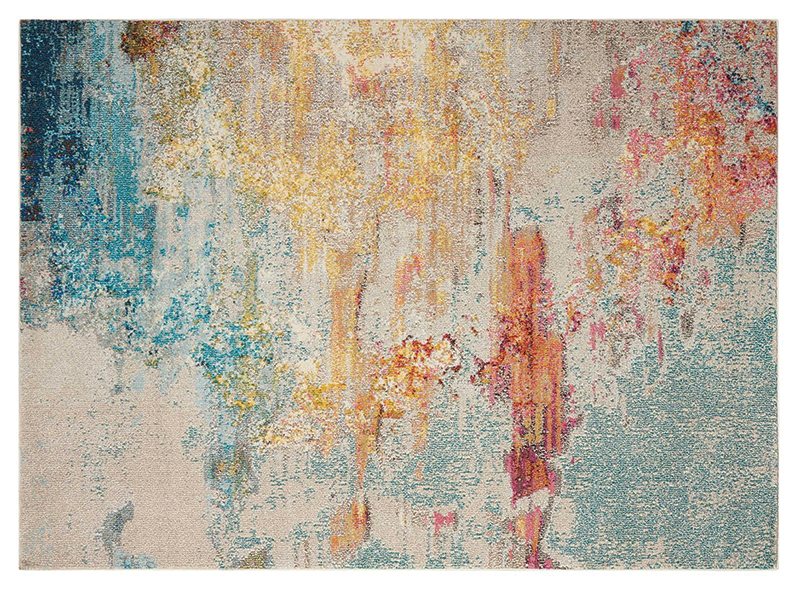 The Rise of Modern and Contemporary Rugs

This movement toward Modern and Contemporary rug designs has been swift and all-encompassing. Area rug trade shows and retail showrooms of the early 2000s still had a fair amount of representation of Vintage and Antique Rugs in them, with many vendors showcasing their finest Traditional rugs, alongside the steadily increasing numbers of those showcasing Modern and Contemporary pieces.

In the ensuing fifteen or so years, the majority of trade shows and retail showrooms had fewer and fewer vendors displaying Vintage and Antique rugs in them and moved almost exclusively into the representation of Modern and Contemporary rugs.

Some of the trade shows maintained a small sub-section of Antique rug vendors, often called an “Antique Rug Pavillion”, but those numbers dwindled, and the foot traffic seen in those Antique areas paled in comparison to the heavy flow of foot traffic to the endlessly popular Modern and Contemporary rug sections.

Even among rug retailers, the percentages of Modern and Contemporary rugs that they would carry and display in their showrooms, versus Antique Rugs maintained, would steadily increase over the past quarter-century, to the point that what was one time a 50-50 ratio of modern to antique would soon skyrocket to 90-10, and often higher than that.

Some Reasons for the Rise in Popularity of Modern Rugs

The reasons for the meteoric rise in popularity of the Modern and Contemporary Rugs were many. First, they are less expensive and easier to afford for consumers with lower budgets. Second, they are more easily disposable, and consumers would feel more comfortable using a Modern rug for a few years, and if it got stained or damaged, would not have to worry about having it professionally cleaned, so they could just dispose of it, and move on to another new rug with a fresh look and a low price point. Third, they are more adaptable. Unlike one-of-a-kind Vintage and Antique Rugs, the Modern & Contemporary Rugs could be made available in a variety of sizes and colors, customized to the buyer’s needs and tastes. Fourth, they are what the name implies, Modern and Contemporary, and as such, a much-desired way of distancing the younger generation from their parents’ old, stodgy heirloom pieces, which the younger generation in many cases wanted less than anything.

The Recent Return of Color and Traditional Styles

Like any form of fashion, whether rugs, furniture, clothing, or whatever else, all things that are in fashion have life cycles, wherein they are at one point at the height of fashion, then fall out of fashion, and then are rediscovered and come into fashion again.

This shift in and out of fashion is related to generational change, alluded to above, in which the younger generation will frequently discard some elements of what is considered fashionable from their parent's generation, thinking of it as being outdated, out of touch, and undesirable, only to have the next generation rediscover those abandoned items, and reimagine their desirability for the newer age.

Such is the current situation with Vintage and Antique Carpets, and their colorful, centralized, maximalist designs. For the last generation, and for far, far longer than that, Vintage and Antique carpets were the creme de la creme of luxurious floor coverings and were items of great importance, which would be passed on from generation to generation.

While much of that legacy of passing on Antique Rugs from one generation to the next was scuttled in recent decades, with the proliferation of Modern Rugs, the past couple of years has seen a noticeable return to Traditional styles, colors, and motifs.

This return of Traditional Carpet styles can be seen all around, from their resurgence in the representation of Vintage and Antique Rugs in retail showrooms to their appearances in popular shelter magazines, movies, and television shows, to the increase in rug lines from Modern and Contemporary rug vendors, which replicate the aesthetics of the Traditional Oriental Rugs.

Vintage and Antique Carpets, as well as other items, including home furnishings, art, jewelry, and fashion, have also seen a considerable uptick in sales, both in the physical realm of brick and mortar showrooms, but perhaps more noticeably in the digital realms of online sales and eCommerce.

On luxury online marketplaces, such as 1stdibs, Chairish, and Houzz, there is a very strong representation of Vintage and Antique Textiles, including Carpets, Tapestries, Pillows, and other such decorative items. 1stdibs has led a booming trend of online sales of Vintage and Antique decorative items, reporting annual sales on its platform in excess of $350 million, and recently launching its IPO.

Even in the world of the major auction houses, where the top names, such as Sotheby’s and Christie’s have seen the diminution or elimination of their dedicated Antique Rug departments in the past decade or so, other auction companies, led by Nazmiyal Auctions, have focused squarely on this void in the market for auctions of Vintage and Antique Area Rugs, and have been doing so well, that they have somewhere in the realm of a 90-percent sell-through on their Vintage Rug Auctions, something virtually unimaginable even a couple of years ago.

The Archetype of What a Traditional Rug Looks Like

With this return to fashion of Traditonal Rugs, a big question arises. If Traditional Rugs are characterized by their centralized design, by their busy fields, and by their strong color palettes, is there an archetype of the one most defining Antique Rug, which captures all of those things, in one singular, stunning carpet?

The answer is a most definitive YES. And that answer is the Ardabil Carpet. 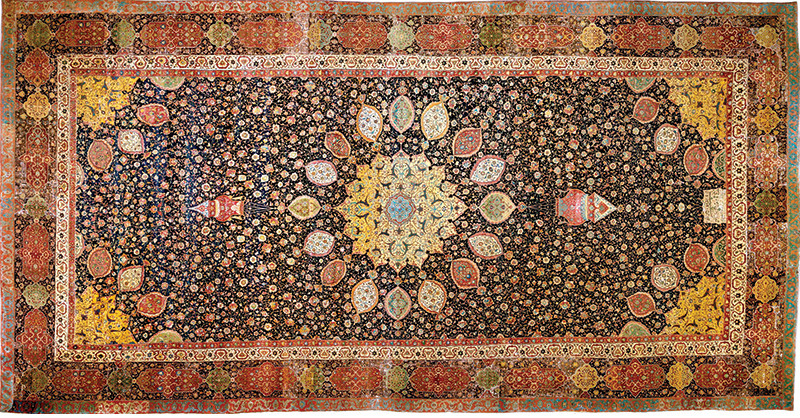 The History of the World-Famous Ardabil Carpet

Perhaps the single most famous Antique Carpet in the world today is the London Ardabil Carpet, which has long been kept in the Victoria and Albert Museum in London. This magnificent carpet dates back to 1539 and is a massive rug with the measurements 34'3"H x 17'7"W.

This magnificent palatial carpet checks off all of the characteristics of what the ultimate Antique Carpet should be; it is hand-knotted with incredible weave density and dexterity, counting roughly 26 million knots on its fine wool pile and silk foundation. It has an elegant central medallion, which is famously surrounded by numerous pendants, and which is flanked at either end by a hanging lantern, all of which are reflective of the dome of the ancient Sheikh Lotfollah mosque in the city of Isfahan, the majestic designs of which they embody. It has a busy field, which in the time it was woven, was the ultimate expression of the virtuosic artistry and dexterity of its weavers, and which in today’s world of reinvigorated interest in Maximalist designs, is a template from which other fit-as-much-in-there-as-you-can designs are based. It has bold colors and is the very definition of what has for generations been referred to as jewel tones in the rug trade. It is the quintessence of what an antique rug could and should be.

It has all of these qualities, and then some. Add to this already potent mix a few invaluables that elevate the Ardabil Carpet from a mere masterpiece to the stuff of legend. First, it has one heck of a pedigree. As discussed in one of our previous InAntiques articles, the Ardabil carpet comes from the famed Northwestern Persian weaving region of Tabriz, and specifically from the area of Ardabil, where some of the greatest master weavers in all of Persian Rug weaving history have emanated from. It was woven in the Golden Age of Persian Rug weaving, under the watchful eye of a king of the Safavid dynasty, Shah Tahmasp, who was known as one of the country’s greatest patrons of the art form of carpet weaving. The carpet became renowned as “The Holy Carpet of the Mosque at Ardabil.”

In the early 1890s, one of the most iconic figures in the history of rugs, William Morris, who would later go on to transform the rug industry in his own right, was a Referee at London’s Victoria and Albert Museum, and after much convincing, was able to raise a vast sum of money to acquire the carpet for the museum, and also have it repaired after the wear and tear it had experienced over the past centuries. It has been a mainstay there ever since.

In addition to this astonishing provenance, the rug also bears another incredible and unique characteristic. The rug bears a cartouche that has both a weaver’s mark, as well as a poem, which translates as follows:

I have no refuge in the world other than thy threshold.

There is no protection for my head other than this door.

The work of the servant of the threshold 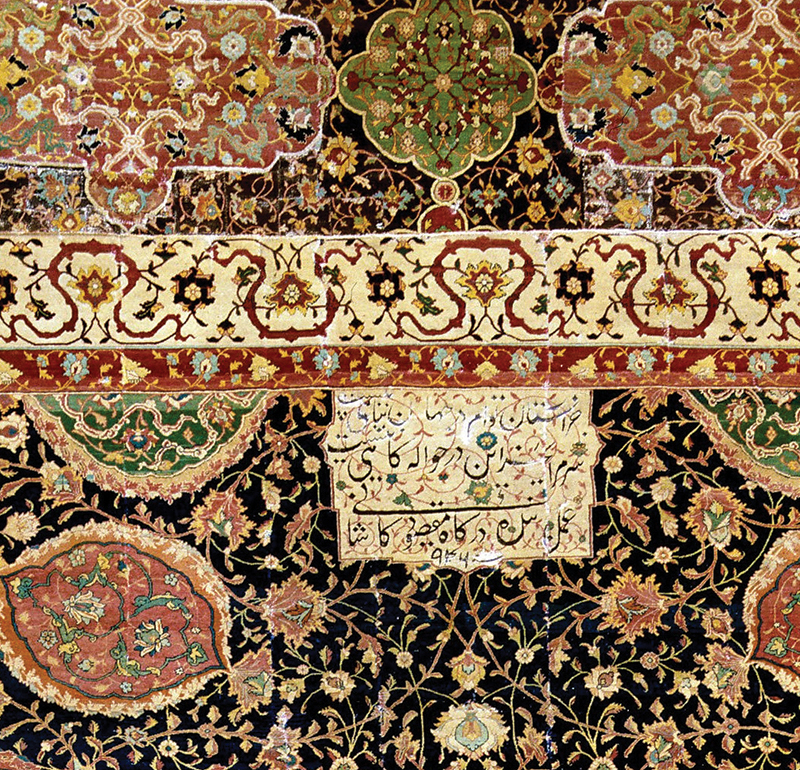 Like any of the world’s great masterpieces, the London Ardabil Carpet has had its iconic design replicated and reimagined in countless rugs, and in countless ways. In some cases, the replicas try to be as close as possible to the original. In other cases, the replicas change colorways or substitute in different tweaks to some aspects of the carpet’s inimitable design. In any color, shape, or form, though, the replicas of the most recognizable carpet in the world only confirm the idea that “Imitation is the sincerest form of flattery,” and that even a replication of the grand design and Maximalist aesthetic of the magnificent London Ardabil

Carpets are something special, even for being just that. And to this day, they remain some of the most in-demand rugs in the area rug market, whether Antique, Vintage or even reimagined with a Modernist twist. 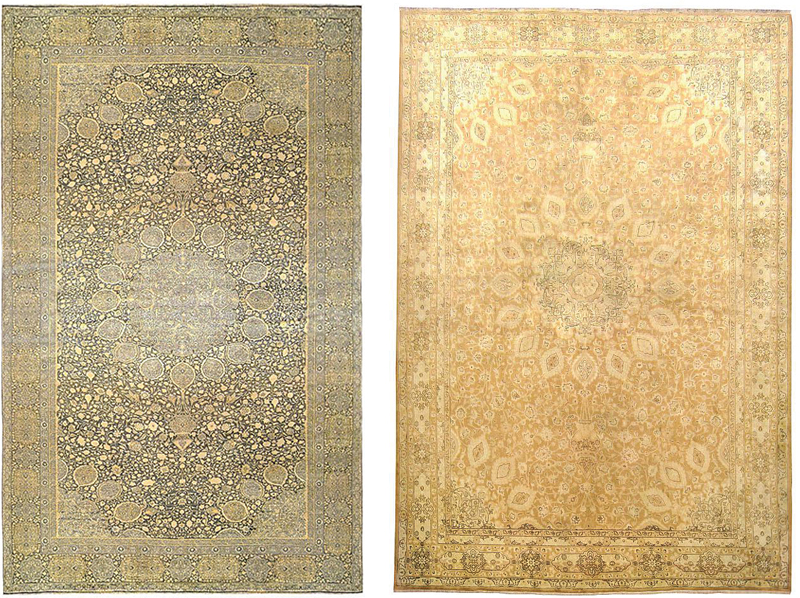 For some of the Ardabil Design Vintage and Antique Carpets from the collection of Persian Gallery New York, see these images above, or search pgny.com.