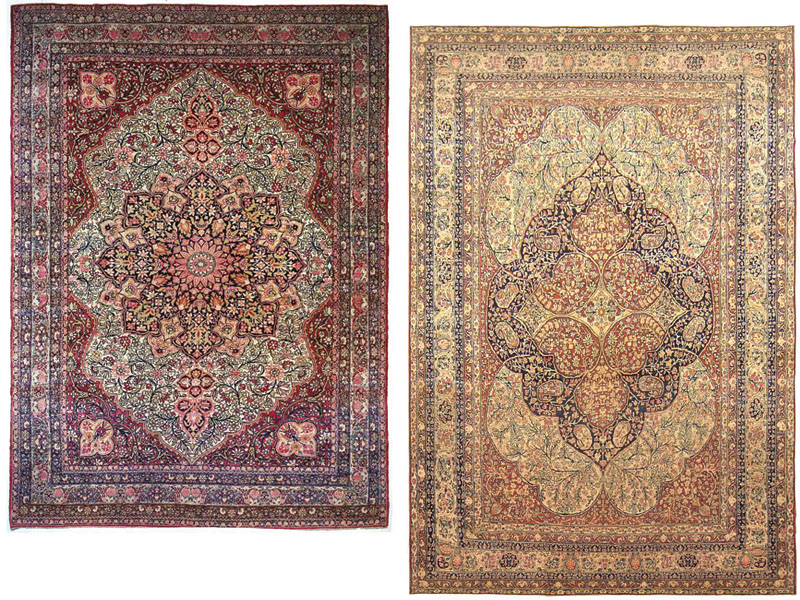 There are endless debates among vendors, collectors and enthusiasts of vintage and antique rugs as to which of these styles is the best. We have discussed in previous issues the differences in the fineness of the weave of a rug, with some defining fineness based on weave density, others defining it based on intricacy of design, and yet others defining based on the unique artistry of a given carpet. Thus, there are many different opinions as to which antique rug style can definitively be called the finest.

When it comes to determining which is the King of All Carpet Styles, however, the answer is much simpler, and is even stated in the name of the rug, the antique Kerman-Shah carpet.

The name Kerman-Shah literally translates to King of Kerman and suggests a royal lineage of rugs from the southern Persian province of Kerman. Or does it?

In reality, both the name Kerman-Shah and the antique Persian rugs it represents are both rather complicated issues.

Having been in the antique rug business for a quarter century, myself, and working in a company that is now celebrating its 50th anniversary (see more in Insider NEWS, page 61), the name Kerman-Shah has long been familiar, and has long represented a certain type of rug; the finely woven Lavar Kerman rug, with short pile, an intricate floral weave, and a unique patina of age that instantly screams antique.

Are Kerman-Shah and Lavar Kerman carpets really the same thing? Or are they different? And what do they have to do with being the King of All Carpets?

For this installment of InANTIQUES, we explore the distinctions between these two rug styles, and several other related styles, which are all connected to the classic Kerman carpet.

The nomenclature of antique Persian rugs is usually a simple thing to decipher, with the rug name being a reflection of the city, province, village, or tribe in which the rug was woven. 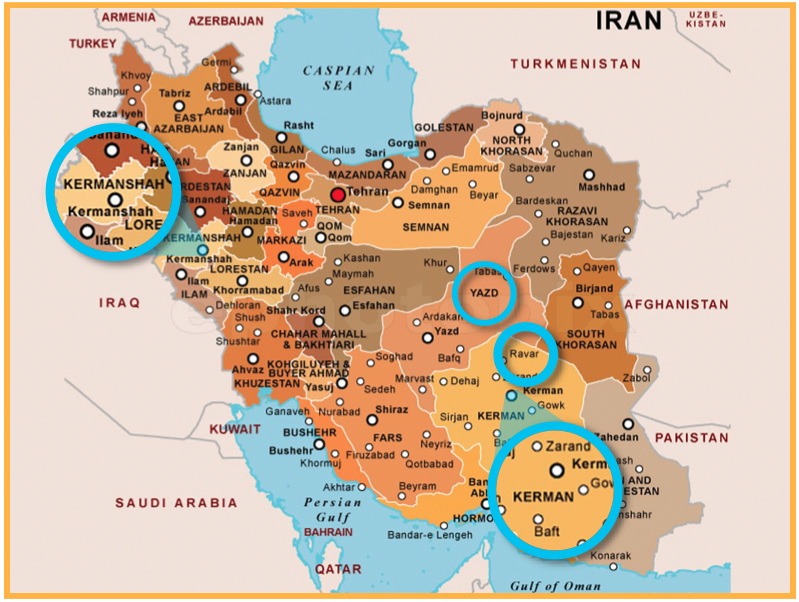 On first glance, one would think that the rugs bearing the name Kerman-Shah emanate from the ancient city of Kerman-Shah in Persia’s North West. To a certain extent, that is true, as there are indeed some rugs that originate there, and bear that name. But these “original” Kerman-Shah rugs are few and far between, and according to one colleague, this type of Kerman-Shah rug only makes its way into the rug market once every couple of decades.

This “original” type of Kerman-Shah rug which was actually woven in that city is a relatively dense rug, with thick and stiff wool pile, reminiscent of the antique Persian Bidjar rug, which is renowned for its thickness and density, and is known as the “iron rug” for its sturdiness and resistance to wear.

Unlike most other Persian rugs, which are under-girded by a cotton foundation, and are topped with wool pile, these ancient “original” Kerman-Shah rugs have both a wool pile and a wool foundation. This doubling of wool pile and foundation creates an extra level of thickness and sturdiness, which like the similar Bidjar carpets, makes for a distinct type of rug that can stand up to the heaviest of foot traffic.

In the rug trade, though, this thicker, “original” type of rug with the wool foundation is not the one that is most commonly referred to as a Kerman-Shah carpet. Instead, that moniker is much more often applied to another style of rug woven in another province with a similar, name, the Lavar Kerman rugs woven in Kerman in Persia’s South East.

The names Kerman-Shah and Lavar Kerman are almost interchangeable when applied to the ancient type of rugs from the Persian province of Kerman, woven in the mid to late 1800s. These antique Lavar rugs are totally different than the rugs woven in the city of Kerman-Shah, even though they colloquially share the same nomenclature.

The Lavar rugs have a cotton foundation, and not a wool foundation; short and fine wool pile, and not thick and dense wool pile; an intricate floral design and a patina of age; and not a more coarse design on a sturdier body that resists wear.

How did these rug names become interchangeable, and why did the name Kerman-Shah from a far-away part of North West Persia, which has its own thicker and denser style, get applied to the finer South Eastern Lavar Kerman rugs?

This distinction goes back to the Sasanian era of the Persian Empire, which ruled from 224–651 of the common era. An early Shah in that dynasty, King Shapur III, appointed his son, Prince Bahram as the governor of the Kerman province, and in doing so, gave him the title of Kerman-Shah, or the King of Kerman. In the year 390, after Prince Bahram had succeeded his father and become King Shapur IV, he relocated to a province in Persia’s North West, and renamed it after himself, as the new province of Kerman-Shah.

Thus, the Kerman-Shah name has existed in both the South Eastern and North Western provinces since ancient times and has always connoted Kingship. The native weavers of South Eastern Persia in Kerman, based on their geography, weaving techniques, traditions, and longer tenure as the home of the Sasanian King, bore the tradition of this finer, thinner rug style. The native weavers of the North Eastern province, which would a century later be renamed Kerman-Shah, only adopted that moniker later on, long after the person who brought it to them left his original territory. 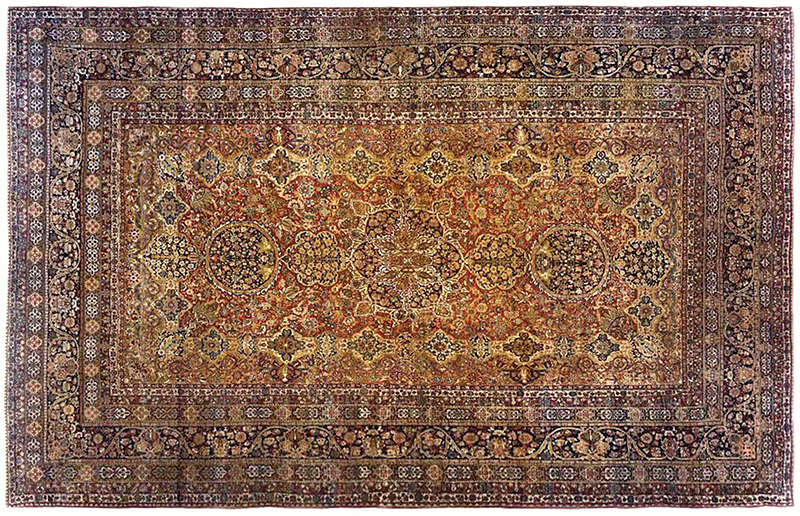 Now that we’ve settled the history of Kerman-Shah versus Lavar Kerman rugs, we must grapple with another mystery; why the finer, thinner Lavar Kerman rugs bear the name Lavar, when they are actually woven in the northern sub-section of the South Eastern province of Kerman known as Ravar.

That being the case, the standard way of naming these rugs from Ravar in the province of Kerman should be to call them Ravar Kerman or Kerman Ravar carpets.

Many people within the rug trade do, in fact, use this terminology when referring to the carpets more commonly known as Lavar Kerman rugs. What, then, is the difference between Ravar and Lavar?

The name Lavar Kerman seems to be something of a corruption of the original Ravar name, and likely proliferated due to differences in pronunciations, accents, and dialects within different parts of the Persian population.

Much as how people in New York might pronounce a word or name differently than someone in Missouri, the name Ravar seems to have been pronounced differently in different Persian regions, and somehow or other, the Lavar pronunciation is the one that has stuck with Western rug buyers, vendors, and collectors. 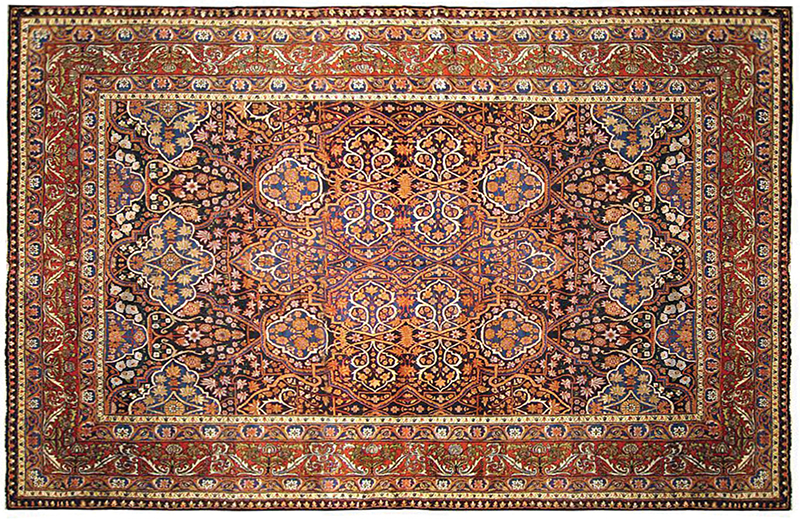 Another distinction between antique rug styles from the Persian province of Kerman is between the Lavar (or Ravar) Kerman rugs and Kerman Yazd rugs. This is a simpler difference to delineate, as Yazd is another sub-section of Persia, further north than Ravar, and at the far northern end of the South Eastern Kerman province.

Kerman Yazd rugs are typically more colorful and vivid than their Lavar Kerman counterparts, and with wool pile that is a bit thicker and sturdier. The Yazd rug is neither as thick as the “original” Kerman-Shah rugs from the North West nor as thin as the Lavar (or Ravar) Kerman rugs of the South East, although they are closer to the latter than they are the former.

The Yazd rugs are not as commonly found as the Lavar rugs but are prized by many collectors for their bold color combinations, audacious designs, and unique aesthetics. 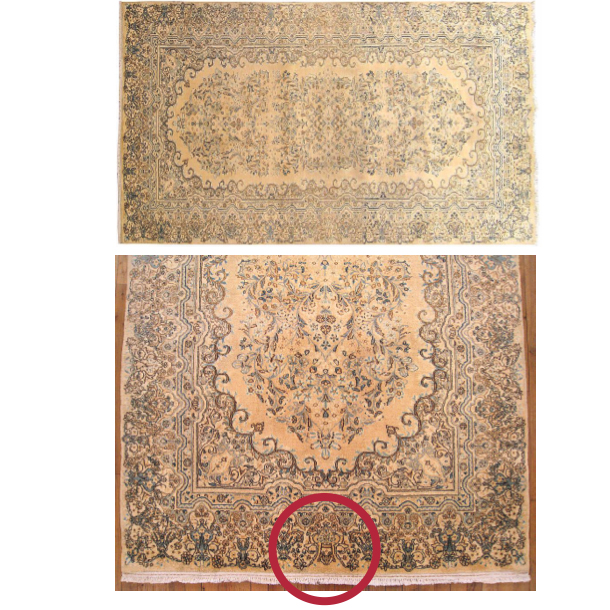 We established the royal heritage of the Lavar Kerman and Kerman-Shah rugs earlier in this article. What relation do they have to Crown Kerman rugs? Simply put, both are rugs woven in Kerman that represent Kingship. They just represent different eras of Kingship.

The Crown Kerman carpets were part of a wave of rugs from the weavers of the main part of the Kerman province, woven for the members of the Qajar dynasty at the turn of century in the late 1800s and early 1900s. They are easily recognized by the depiction of a crown that appears in their bottom borders. These Crown Kerman carpets are part of a larger shift from the thinner, finer era of weaving in northern Ravar that produced finer, thinner carpets, into a greater centrality of weaving further south in Kerman, focusing on thicker, sturdier rugs, with more plush wool pile, and with the previously uncommon addition of lustrous ivory or pale yellow wool as the primary color source. 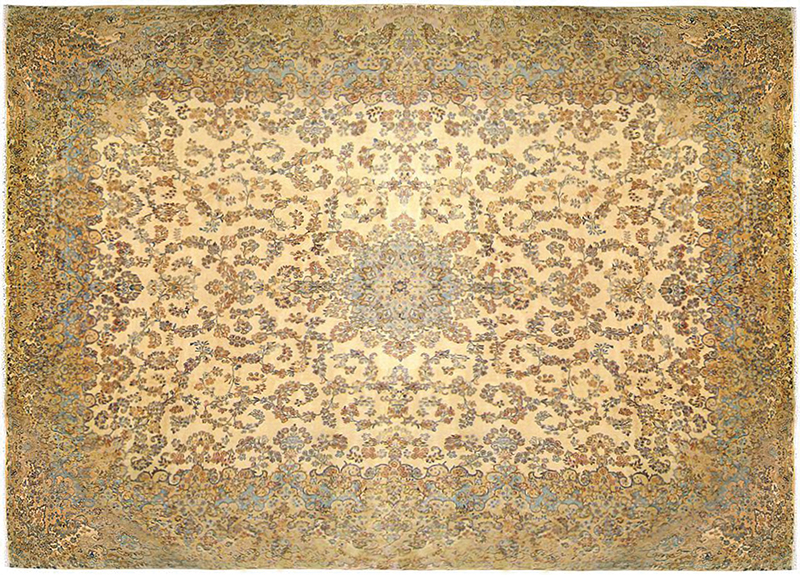 While there are many more sub-divisions we can make within the wide world of Kerman carpets, the last one we’ll explore here is the American Kerman carpet.

After the ascent to popularity of the Crown Kerman carpets of the late 1800s and early 1900s, the new aesthetic they bore exploded in popularity, as did the fascination with Persian rugs from newly enriched middle and upper-class buyers in Western Europe and the United States. The fall of monarchies across Europe coincided with the Industrial Revolution and created a new era of Western buyers who were eager to import a beautiful Persian rug for their stately homes.

A boom in Persian rug weaving ensued, led by the aforementioned Western importers, who led the Persian weavers to redirect their output, but to more European and American aesthetic requirements. 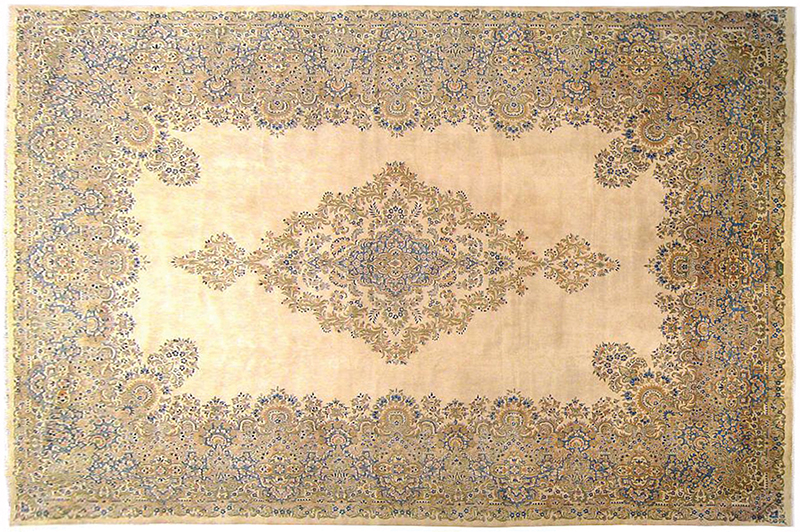 Thus was born the American Kerman rugs of the 1910s to 1940s and beyond. These rugs were woven in the Kerman province but were woven with mass export to the West in mind.

A derivation of the Crown Kerman, these rugs focused on simpler color palettes, with ivory or other soft wool colors being predominant, and with a less cluttered floral design being preferred. The designs often featured a simple floral central medallion, a bare central field, and a foliate border. Dozens of variations on this theme were created, but all with a similar feel, and with thick, lustrous wool pile, meant to withstand traffic, and yet be soft and supple underfoot.

While these rugs no longer bore the signs of ancient Kingship, either of King Shapur III or IV or of the later Qajar kings, they earned a new distinction that carried forth the King of All Carpets legend; the American Kerman rugs became the King of All Exported Carpets to the Western Market.
All of the styles enumerated throughout this article remain very popular with rug buyers around the world, and many wonderful examples of each style can be found in a variety of sizes and designs at pgny.com.

ALL RUG IMAGES COURTESY OF PGNY